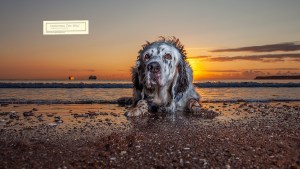 Quick update on the stuff and nonsense that has been going on at Shooting The Dog as we head into October.

Back in August we had Gadget and Gizmo in the studio for a top secret “birthday surprise” photo shoot. The birthday has been and gone, so we are now able to share some of the photo with you good people.

They were great fun, and I hope that the birthday surprise was a hit with their owner.

Back in the early days of lock down we held an Easter Parade competition to win a photo shoot. Maybe because of the lock down it wasn’t a huge success. In fact we only had two entries. So it only seemed fair to give them both a voucher for photo shoot.

Skipper was one of those winners.

Skipper’s owner had an idea in their head of what she wanted to achieve from her photo shoot. Plans were made for an early morning session at the beach. Skipper is a great swimmer, and his owner wanted to capture that. For me, it was the perfect chance to try out some shots against the sunrise. So it was a win-win situation. However, then the weather turned, and our plans were put on hold for a bit.

Earlier this week this week we finally had a fine looking morning, and we could both make it. So, I finally had the pleasure of photographing Skipper.

It was a fabulous morning, and the water wasn’t too cold. Hopefully Skipper’s owner will be overjoyed with the resulting photographs

Our Christmas Card Mini-Shoots are back for 2020, and bookings are already coming in.

Press the button for all the information.

The Coalition Of Photographers

The lock down has been difficult times for all of us involved in the creative arts. From musicians, actors, artists, and photographers, to name just a few. Many photographers rely on weddings and events to bring in their work. When these were all stopped so was all income for these areas. As well as the demand that is created for the specialist print suppliers and other industries that support us. With the majority of photographers being self employed and many not having bricks and mortar establishments they have not been able to get much of the government support offered. I have been lucky as my work does not rely on events, and I have a studio that was eligible some government support, many of my peers have not been so lucky .

After investing heavily in equipment and learning our art, the UK government thinks our jobs are “unviable” and that we should all retrain to do other high skilled new jobs. Which, to be honest, don’t even exist in my part of the country.

Anyway, to provide a single (and loud) voice for the photography industry the Coalition Of Photographers has been created. By joining together, hopefully, we can make ourselves heard, and we can get much needed help for those who need it. In this media rich world we live in, can you imagine a life without pictures and videos?

That’s enough about the October Shooting The Dog stuff for now.

Time to start planning for what I hope will be a busy lead up to Christmas. We are all ready to roll with our Christmas Card Mini-Shoots. The first one is due in next week.

There is lots to look forward to in the coming weeks – Halloween, Guy Fawkes Night, and, far more importantly, my birthday!